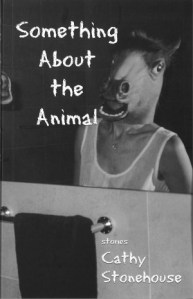 Along with Montreal Expos pyjamas and king size versions of chocolate bars, nothing grabs my attention like a horse head on a human body. The latter, in the form of a beautiful photograph by Gabrielle de Montmollin, can be found in all its creepy glory on the cover of Cathy Stonehouse’s debut short story collection Something About the Animal (Biblioasis, 2011). My review, free of superficial cover art observations, recently appeared on The Rover.

The stories in Cathy Stonehouse’s debut collection depict life as a series of sad, violent, and sometimes insane acts. Fittingly, they are populated by sad, violent, and sometimes insane characters. This is not uplifting, syrupy beach reading. Something About the Animal is a dark, often unsettling book that remains true to its own gloomy fictional universe.