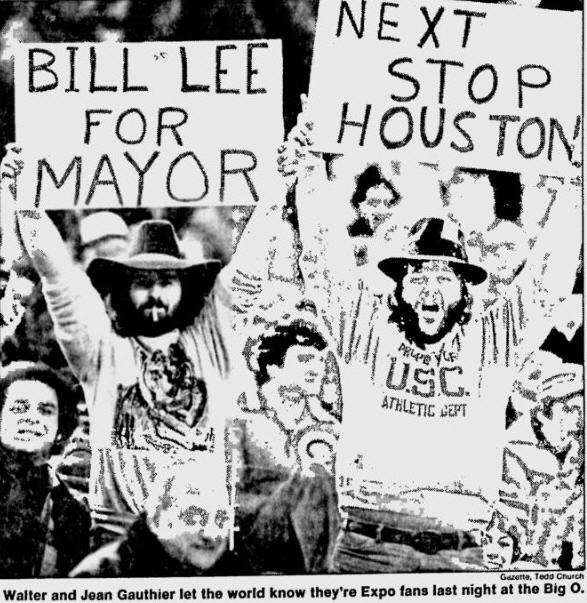 Happier Times: This photograph by Tedd Church appeared on the front page of The Montreal Gazette on October 9, 1981, the day after the Expos won Game 2 at Olympic Stadium to take a 2-0 lead in the NLDS versus Philadelphia. I was at the game, sitting some five or six rows in front of the sign-wielding Gauthiers, who made a positively educative impression on my 9-year old self. "Bill Lee For Mayor" is a sentiment arguably just as applicable today as it was 30 years ago. And file "Next Stop Houston" under Antiquated But Forgiveable as, at the time the photo was taken, the Astros were up two games to none in the Division Series they'd eventually lose to the Dodgers.

Fuck that 30 years ago today the Expos were but one win away from advancing to the World Series. Fuck that I stayed home from school, only to watch Rick Monday and the Los Angeles Dodgers put end to that dream and to the Expos’ one and only post-season appearance in their history. Fuck that I cried my little 9-year old eyes out. It’s time for some positive thinking for once on October 19th.

Blue Monday was so devastating that it has, deplorably, come to symbolize almost everything about 1981 Montreal Expos. The loss on Blue Monday was so bad, so ruinous, that apart from the image of Warren Cromartie waving the Canadian flag in Philadelphia, we tend to forget all the games the Expos won in the 1981 playoffs. There were three against the Phillies to take the strike-necessitated NLDS (what, at the time, we charmingly called the “mini-series”). And there were two against Los Angeles, two wins in a best-of-five series; as close as they could come without actually taking it.

So instead of spending the 30th anniversary Blue Mondaying all over again, spend some quality time today with, courtesy of baseball-almanac.com, the boxscores of those wins.

And no fucking crying.

If you must relive the whole thing, you can find those other games by following links found here and here.